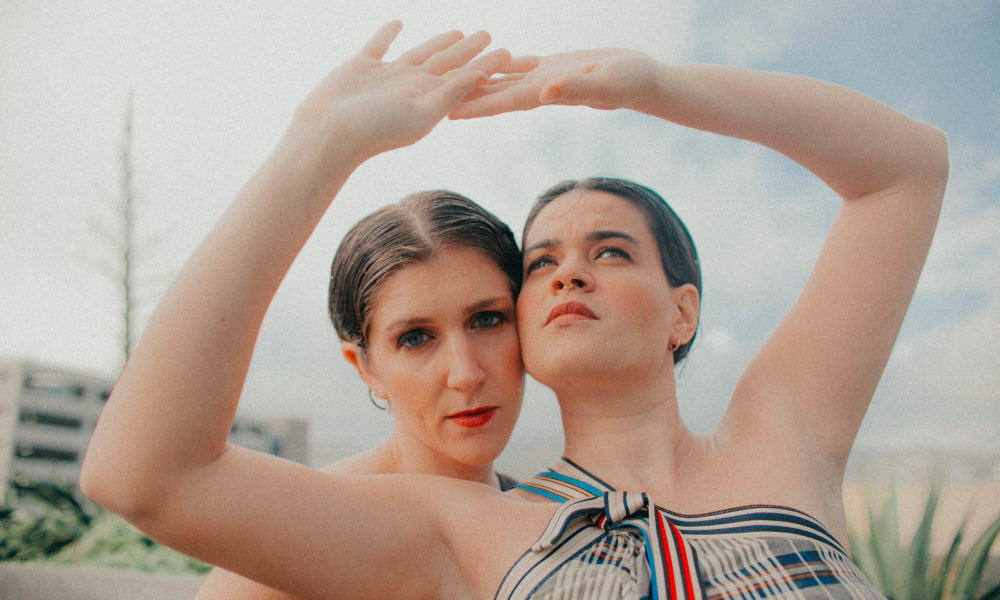 To ignite a new era, JJ Mitchell and Hana Elion of electronic-punk duo Overcoats decided to shave their heads. Filming what would be the music video accompanying their single “The Fool” (inspired by the tarot card of the same name), the two had six cameras pointed at them as they shaved each other’s heads, screaming and laughing whenever the director yelled “cut!”, and beginning the era with a clean slate.

“We decided that we wanted to do something brave and bold to mark the beginning of this next chapter of our project. We wanted to bind ourselves together as warriors through this fight. So we decided to shed our armor and reclaim our bodies,” says the band on the single and music video, hailed by NPR as one of September’s top releases. “It was powerful to take this leap of faith into an androgynous and less-definable identity. The experience of filming the video was really intense. We only had one shot at it!”

This energy radiates throughout the ten-song battlecry that is The Fight, the duo’s dreamy, edgy and punk-infused sophomore project. The album is a push, so to say – that extra motivation you need to quit your job, divorce your husband, or finally make that big decision that will change your life – and that it’s not always about picking up arms, but picking up yourself. And in the toils of a global pandemic, the ongoing fight for human rights, and waking to new horrific injustice nearly every day, the theme of picking up oneself turned into its intended means of survival – just not how once expected.

When Brooklyn natives Hana and JJ wrapped up tour for their critically-acclaimed debut album YOUNG in 2017, they felt as though the world around them was collapsing. In grief and disbelief, armed with guitars in an NYC apartment, the two wrote their soundtrack over a three-year span, taking ownership of their powerful platform and diving headfirst into personal, political, and social issues affecting individuals and society. Following their March release of The Fight came a collection of slowed-down, remixed tracks called The Fight (Continued), released at the start of July and led by a quarantine-inspired music video for the new track “Fire & Fury – Bedroom Mix”.

“The album deals a lot with the current plague of apathy. It’s troubling how little empathy people have for each other. This is the fight, the great divide. But we can get through it.”

There’s a fire, there’s a fury / sky is falling, but we’ll get through it

Over the unpredictable last few months, Overcoats have maintained their presence through Instagram livestreams and performances, releasing loungewear merch, and a new bedroom-pop music video. The duo also took to social media to push resources and events for Black Lives Matter, sharing dates, times, and locations for protests in NYC and links to petitions and bail funds.

“When we scheduled this music release we did not anticipate the cultural and political moment that would be occurring,” the band wrote on Instagram during the release of The Fight (Continued) track “Keep The Faith – Strings Version”. “We would like to acknowledge that nothing matters until black lives matter.”

Bonded as artists and best friends, Hana and JJ share beliefs and interests as they do stark differences, helping them grow and learn from each other. “We both grew up differently but with the same mentality of being travelers in this world who are interested in creating healing and justice. We both love art and cry in the same movies. And through the journey of Overcoats, we have had so many shared experiences. It feels like growing up together.”

Accompanying the societal and political climate comes the fight for gender equality, with which Overcoats identifies. Staunch feminists, the artists find it baffling that the idea of equality among gender expression is considered radical. “Just being ourselves, just taking up space,” Hana and JJ confess, “that alone feels like a feminist act.”

Before the current pandemic and social distancing laws, Overcoats supported Cold War Kids on tour, and consider themselves artists who absolutely love touring. Being home is what feels weird to them, having grown both accustomed to and fond of being on the road, playing energetic shows and meeting fans, while doing a lot of yoga and bowling in their down time (and watching Love Island to unwind – “We are suckers for terrible reality TV.”)

“We have so much damn fun in our van,” say Hana and JJ (a Leo and a Libra, respectively). “Blasting music, cracking jokes, making TikToks… when you’re stuck in the car for many hours with the same people, things get pretty crazy. We get really delirious and it’s a lot of fun.”

Over the years, Overcoats have opened for a string of noteworthy headliners such as The Japanese House and Mitski, and in 2017, recorded a breathtaking Tiny Desk performance. “It has been almost three years since our last headline tour and so we are really looking forward to touring the country and playing all our new music for our fans. We have a really special community of listeners that we love and appreciate, and we want to connect with them and take them on the journey of our album.

“It was clear that we needed to make an album about the state of the world and how we can survive it. This album is about the fight for representation and justice, the fight against your own depression and anxiety, and about fights with significant others. It’s about finding your strength, and we really found ours through writing it.”

The Fight and The Fight (Continued) are out on all streaming platforms, the latter featuring new releases “Fire & Fury – Bedroom Mix”, “Keep the Faith – Strings Version” and “The Fight (Reprise)”.